Yina Cartagena has been a stalwart member of Revolution Ultimate for over a decade. She has been a part of a Revolution side that have won the 11 consecutive national titles, the US Open in 2017, and the inaugural PUL championship in 2019. She has also represented Colombia numerous times, being a key part of Colombia’s strong 2017 World Games team, and lead in stats by far in the Colombian Women’s team that reached the 2016 WUGC final.

She recently announced she’ll be playing with New York BENT for the 2021 US club season. It’s not the first time we’ve seen Revo stars join US club campaigns with Valeria Cardenas representing Seattle Riot and Manuela Cardenas playing for Denver Molly Brown in the 2019 season. 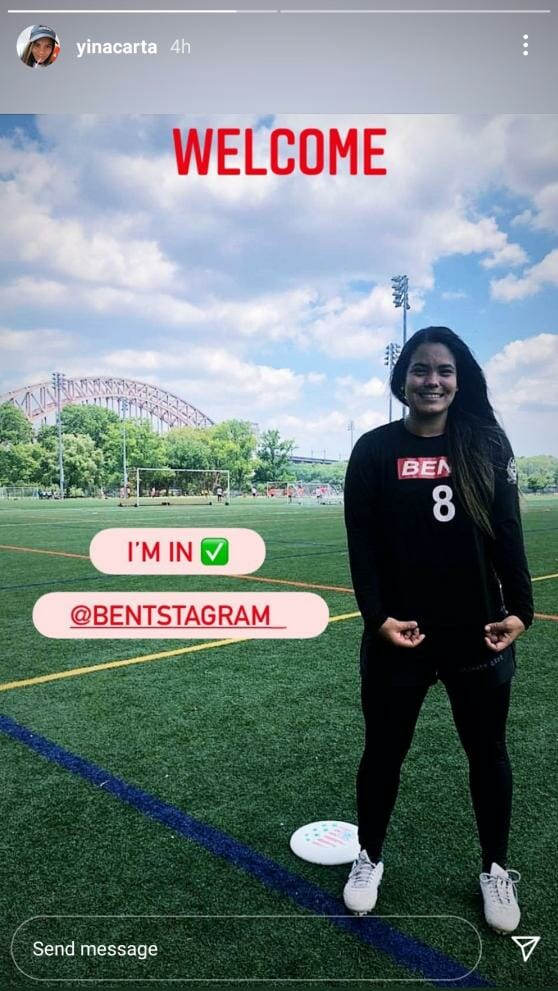 BENT are a high level women’s team that narrowly missed out on nationals in 2019, tragically losing back-to-back games to go. With the addition of possibly the greatest handler of the last decade, BENT’s fortune may be set to change in 2021. BENT secured 2nd place at last weekend’s Boston Invite, behind reigning national champions Boston Brute Squad.

Yina kindly agreed to talk with us about her decision to play with BENT this season, her plans for the upcoming PUL season and some insights as to how she became the world class player she is today.

How has your time in New York been?

I’ve been visiting NY since 2019 for 3 to 2 months and then I return to Colombia. These visits are almost always towards the end of the year and in the middle of the year.

I’ve spent two winters here and it was awesome as I hadn’t seen the snow and this city captivated me. Now with the summer, I am in love; I have been able to see new places and practice different sports recreationally, such as beach volleyball.

When I am here I spend my time mainly with my boyfriend and people from the Ultimate Frisbee community, and I’ve been positively surprised by how nice they are here, in addition to their outstanding level at the sport. Now I am friends with teams like Empire, Blueprint and BENT, who integrated me and welcomed me in the best way.

Tell us about your decision to join New York BENT for the 2021 club season, what’s it been like training with them so far, and what are your goals for this season?

This decision is something very new and fun. We have been thinking about creating a sports exchange project between a USA team and Revolution Colombia for about two years because previously many players from different countries have visited  Colombia to play with us and because of our evident desire to play tournaments with USA teams. Now being here in NY and getting to know the people has encouraged me to consider this project again. Mainly to open the door to an alliance between both teams and thus facilitate the exchange of experience at a high level of Ultimate for all women.

And personally I have received a lot of affection and I treasure the way I have been welcomed by the city and by BENT especially. I want to contribute a bit of my experience, but I also want to learn to live the American Ultimate culture , learn new things in terms of dynamics, styles, systems, etc. Everything you can learn on and off the field with an opportunity like this.

The experience in the tryouts was amazing, with a very high level and many talented players. What I value the most is that I’ve cultivated a very good connection with the players and I am learning English which they teach me, and they are learning Spanish. This work is collective and that’s the most satisfying.

I’ve been planning to play with them since 2020, but because of the situation it was delayed. Now I know we will have a roster that is going to impress the other teams, but beyond that is what we’re going to experience during the process and our previous encounters. There will be quite a lot of learning along the way for both me and BENT.

Now, in addition to helping consolidate the team and building the motivation to return to the fields, I have the  goals of reaching the USA national championships with BENT and continuing to meet my tournament schedule in Colombia. It’s important for me to keep playing with Revolution and to fulfil the other commitments I have with the national teams. So this is a nice process through which I’m going step by step.

I also want to clarify that one of the reasons why I enter the US for short periods of time is to maintain the good status of my visa (My wish is to be able to have a visa with unlimited access).

Another thing to note is that Colombia has already begun its selection process for WG2022, which is one of my goals.

We’ve seen reports from Ultiworld that the women’s divisions of some of the most high profile tournaments of the US club season are likely not to go ahead, how eager are you and your teams to get back to tournament competition?

Actually we at Revolution have been preparing non-stop during this year and a half, we have kept our firm steps towards what we want, and we’ve competed in local tournaments. Now our goal is to give continuity and a lot of support to the PUL, even though its format has changed a bit this year. We also have in mind to make an international trip in November for the whole club, since only selected players participate in the PUL.

And I know that we miss the US Open too as I think it is one of the best tournaments to challenge ourselves.

BENT is scheduled to play preparatory tournaments before regionals such as the Boston Invite* and the Elite Select Invite OH; in this one I will be present with several other surprises.

We’re very excited, and whatever tournament it is, I’m sure we’re going to give our best, and most importantly, we’ll help keep the women’s Ultimate on top.

Say with the addition of your world class handling abilities BENT secure a WUCC 2022 spot, will it be a tricky decision of who to play for at that event?

If that happens it would be fantastic, a goal accomplished at its best, which I do not rule out. But in this case there would be no doubt that I would play with Revolution because it’s the team where I was born, which has been with me for 15 years helping me to grow, and we are seeing the results of a lot of time, work and dedication.

Have you thought ahead to the PUL season set to take place this August? Are you planning to play with the rebranded Revo Pro team, or perhaps New York Gridlock?

As I said before, Revo Pro is ready to compete in the tournament, with a better version of us, because thanks to this mandatory break of tournaments during 2020, we have reinvented ourselves and have learned new dynamics for a better Ultimate.

I think it’s important to maintain and continue to support PUL teams, to further develop and promote the competitive women’s Ultimate.

During my stay here I managed to see and support the AUDL teams, and it is really nice to witness all they have achieved and how we can now, as spectators, live  Ultimate at its highest level and organization.

Who have been your favourite players to play with over your career?

It’s a very good question, and although I think one of my strengths is to generate good connections with my players, in no order, these are my favourite players with whom I love to share the field: Elizabeth Mosquera, the Cardenas twins, Alejandra Torres, Laura Ospina and now Amanda Dobby from BENT.

Finally, what tips do you have to young players who want to develop into a world class player like yourself?

Aww, thanks for the compliment. First I would like to say that it has been a process of many years of commitment and discipline, and that during my career I had to experiment through different positions and roles on the field, which I did in the best possible way, finding the best version of myself. And I think that’s what it’s all about, first identifying your strength, and then getting out of your comfort zone and facing new challenges. That makes you a more complete player. But most importantly, keep the fun and the teamwork, because growing together is one of the most satisfying things.

Thanks again to Yina Cartagena for the time she spent answering our questions and making this article possible.

Special thanks to Dayana Guzmán for her help in translating the article and communicating with Yina between English and Spanish.