Hex is a naturally fast-paced offence, which flows organically and is a lot of fun to play. If you want to win and have fun, follow these three guidelines:

Players work together as a team to maximise options, meaning there are tons of opportunities to get involved in the play. For beginners this means more disc time, less restrictions, and more fun. For high level teams this means the offence can adapt quickly to defensive change by utilising the spread nature and quick disc movement. Training Hex will typically develop more intuitive, well-rounded players who are comfortable with the disc, as opposed to specific role fillers.

When used to counter defensive imbalance and/or exploit space, a thrower who is prepared to throw’n’go in any direction can generate flow and penetrate through defensive setups.

Sustained flow is very valuable and hard to defend against, so players should take any open pass available to them without hesitation. This decision tree is a guideline for how players should move, and where they should look, in order to have the best shot at keeping the disc moving.

In this video from 2018 I talk through the decision tree, and look at a point of hex being played from it’s perspective.

Players should maintain good spacing between each other and the disc throughout their possession, as this will maximise their options. The shape that forms naturally with equal spacing between 7 players is a hexagon made of equilateral triangles;

Players should gravitate towards shape positions during play and when flow has stopped. The shape will deform naturally whenever the disc or players move – it doesn’t need to be perfect, but shape maintenance is an ongoing task for each player which will benefit the team. Designate “Shape Police” in training whose task it is to oversee the shape during a point. The disc should be on the outside of the shape, and as the disc position moves across the field, the shape rotates a full 180 degrees – so the central point is directly towards the centre of the field when the disc is on the sideline. Here’s some shape-centered analysis of clips from Australian club team Outbreak Mountain;

When a team focuses on maintaining their shape and keeping the disc moving, they can generate and sustain flow – as explained in this analysis of USA D3 team Stevens IoT;

Combine and train these three elements – technique, movement, and shape – with freedom, creativity, and spirit – and you’ll not only enjoy training and playing more, but you’ll develop faster and start to see great results.

Non-stop footage of Hex Offence in action from multiple teams;

Looking to implement some of these principles into your team? For drills and exercises, check out the felixultimate How to Train Hex series;

To work together with Hive Ultimate – collaborating with planning elements of your trainings & season, check out the higher tiers on Patreon! We can also look into running a Hex Clinic in your city, and provide video analysis for your team – emailwith your request.

Extra notes for players who are familiar with / trained in stack offences / fundamental guide for Coaches:

Next: How to Train Hex 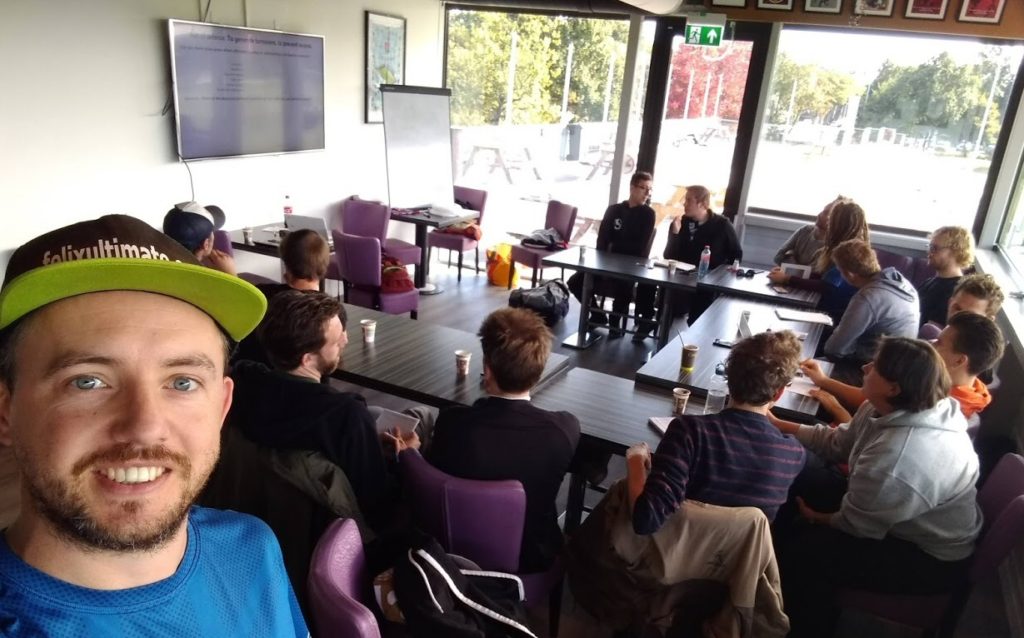 Last weekend saw players from all over Netherlands and Belgium come together to learn Hex Offence and Flex Defence at the Amsterdam Hex Clinic, put together with help from Sjoerd Druven. The clinic started with a classroom session on Flexagon Defence theory – the group discussed common offensive mistakes and shortcomings, and thought about which were the most noticed, and which are rarely considered to contribute to turnovers. Then we looked at how defence could change to take advantage of the less noticed offensive shortcomings, and how such a defence could be trained.

I learnt more about how to teach the strategies and implemented a few new drills with great success. Most importantly though, everybody had FUN playing Hex & Flex!