The data below marks where each pull in the WUGC Men’s Gold Medal match – USA v Japan – was caught or landed, and the path of the disc up until the point where it stopped & the defence was set. For the purposes of this article, “flow” refers to the disc being released fluidly within 2 seconds of catching. 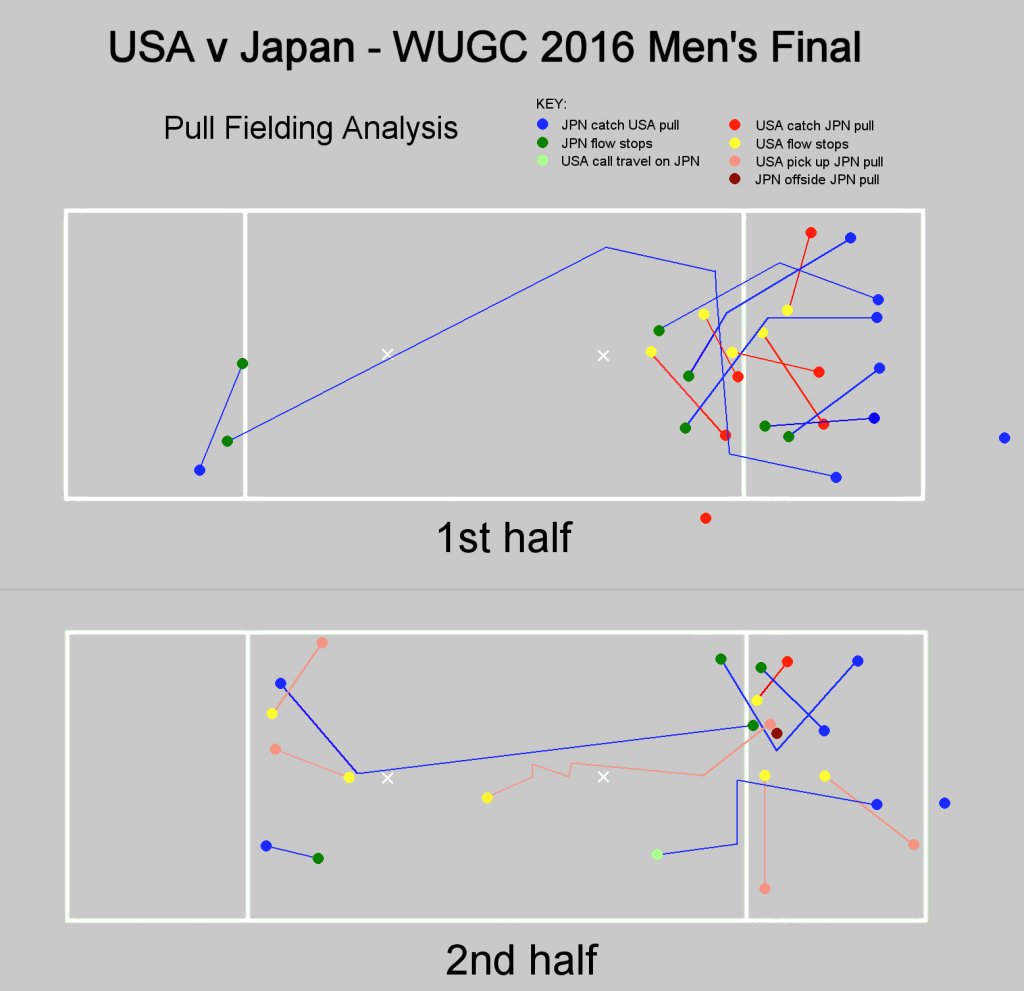 Japan’s pulls were all outside-in, so sacrificed hang-time and distance in order to make them riskier to catch – more so in the second half. This could have been a tactic to tempt a dropped pull, sacrificing being able to pressure USA’s first pass (which they consistently used to centre the disc). USA caught the couple of more bladey pulls in the first half, but let them land 5/6 times in the second half. Japan’s defenders were reluctant to go past the disc after running down the pull – preferring to clog the USA’s immediate downfield throwing lanes.

USA have a very clear pull fielding routine in place – two players hang back, one catches/picks up and passes to the other, who has positioned themselves as central as possible – gaining yards if safe. When the pass is complete, the pull catcher becomes the reset, and the thrower’s focus is turned downfield for the cutters to make the first play. Catching the pull is not of paramount importance in this routine, as seen in the second half when they only caught 1/6 pulls but were still able to get the pass off each time – in fact their least successful centering in the second half was off the one pull they caught.

This style of pull-fielding is very suited to the USA’s style of Ultimate – their aim was to present the downfield cutters with a static centralised handler situation, and they executed this practically without fail.

USA’s pulls were all aimed at maximising hang time and distance – and they executed this with brilliant consistency; 9 from 11 of the downwind pulls floating into the back half of the end zone. They would always send one defender down the centre of the field, arriving first and 6/11 times preventing Japan from centering the pull.

Japan’s pull fielding was more organic and variable: Three players hang back; one catches whilst another is in a central position, and the 3rd player either provides an alternative first pass, a continuation / flow option after the first pass, or makes an aggressive move.

Fielding the pull with three players suggests Japan’s aim was to use flow passes to shorten the field, which they largely succeeded in doing – consistently ending up with a shorter field than the USA, despite the USA’s pulls all being deeper. Twice they scored in flow – once taking four passes, including a lateral / backwards open pass, and once from a two-pass play.

USA’s tactic of sending their first defender down the centre of the field to prevent Japan from centering the disc was relatively effective, but Japan fielding the pull with 3 players was a natural counter to this. With 3 players fielding, Japan were prepared to advance the disc past the USA defender who arrives first in the middle of the field, and did so 5/12 times. This was often at the expense of the disc being moved away from the centre, which did not seem like a priority for them, but was definitely one of the USA’s biggest considerations. This organic style & the disc not being centered resulted in a variety of early-point scenarios – Japan’s downfield players seemed comfortable working from these less commonly seen situations, whereas the USA’s downfield defenders would have been unfamiliar defending against them.

Japan did not always take the flow passes open to them – there were 7 times when the disc could have been moved laterally or backwards by Japan, but they only took these options 2 times – once eventually resulting in a score, once resulting in a travel call on the next pass. At no point did a lateral or backwards flow pass result in an eventual loss of yardage, which suggests it’s an option they should have explored further. The 5 missed opportunities to pass laterally or backwards all resulted in flow stopping immediately or on the next pass.

USA’s pull-fielding routine presented the downfield cutters with a static centralised handler situation every time, which allowed the cutters to get familiar with creating plays from that exact situation. Potential yardage gains with extra passes were sacrificed in favour of centralising the disc, which can also result in a longer field to work with; however this plays to their superior deep game, so it works both ways. Japan may have been more aware of this long-field advantage than USA were, hence why they did not chase down the pull at 10-8, encouraging USA to play with a short field.

USA’s relentless routine consistently put them in the position they wanted, so from their perspective was a total success. Japan used more flow passes and resulted in gained yards – which can be viewed on the whole as a success – but questions remain about whether taking more open lateral or backwards flow passes would have resulted in greater yard gains (if this was their aim).

The objective question of “Which is the better routine/style?” is hard to answer as so many variables come into play mid-point. One can not objectively say the disc being centered is a good thing, or more flow or yards are a good thing, as each is dependant upon the team’s mid-point strategy and style. The relevant information we have to compare the two methods objectively is: neither team turned over when fielding the pull or flowing from the pull, Japan scored twice from flow off the pull, and USA won the game 15-11.*

Personally I preferred Japan’s fluid and variable style, but think there is much room for improvement which can make it more effective and harder to stop, such as taking yard-losing passes in order to keep the flow going. Generating fluid looks at the start of points – from random places on the field – is hard to play defence against, but arguably hard to play offence from also. USA seem to have nearly perfected their routine, but its standardised nature has a potential weakness in that the defence know what is coming – a static look from the centre of the field after one centering pass. Whether or not the defence can use this to their advantage is another question for another article – we did see Japan clogging throwing lanes and downfield space at the start of points as they attempted to do so in this match, if you’re interested in how effective they were then check out the full game footage.

* another potentially useful stat would be the number of points each team scored from the pull without turning over, and in how many passes